The newly created Llamb’s Day kicked off Welsh Lamb’s summer and autumn marketing campaign efforts, celebrating the start of the season for buying high quality Welsh Lamb. The 1st August date coincided with Lammas Day – or Calan Awst – which is the first harvest festival of the year. Llamb’s Day is a time for friends and family gather to feast on the finest, freshest Welsh Lamb, celebrating lamb that has been reared on the lush, Welsh grasslands using farming methods that date back centuries.

A national survey commissioned by Welsh Lamb discovered that whilst many Brits were making attempts to eat seasonal food, they were often mistakenly buying produce at the wrong time of year due to being unaware of the best season to eat lamb.

Celebrity farmer Gareth Wyn Jones was recruited as a ‘Llambassador’ to help raise awareness for the campaign, roasting the first Welsh Lamb of the season at his home in Llanfairfechan, Wales, with stunning views over Snowdonia National Park. The resulting video gained over 12,000 organic views on Facebook and interviews with Gareth were featured on local radio including BBC Radio Berkshire, Leeds and Wales.

To drive further awareness, AgencyUK devised a Llamb’s Day social competition that delivered huge online results with over 5,000 competition entries and over 2.1 million impressions of the #LlambsDay hashtag. Combined social and PR activity ensured national coverage for the campaign totalling over 22 million opportunities to see, with the number of Welsh Lamb website sessions increasing by 59% during the month of August with 81% being new visitors. 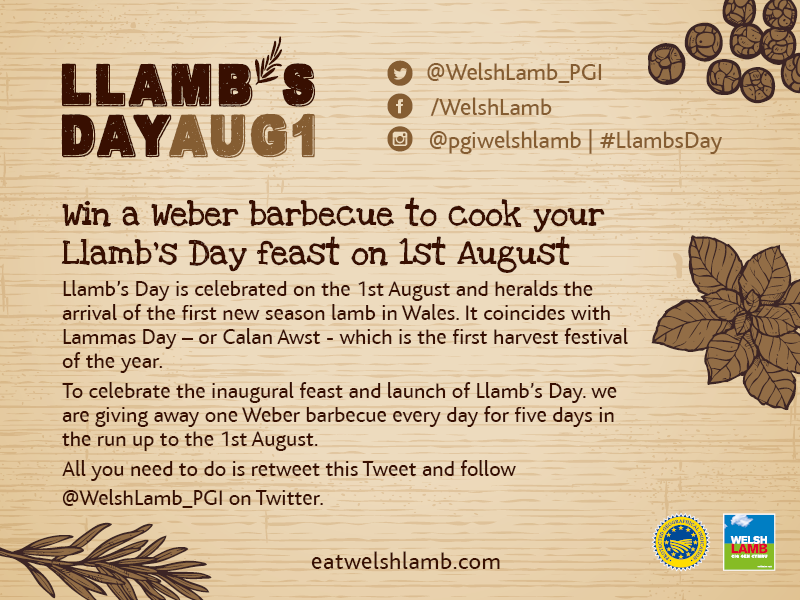 Prys Morgan, HCC’s Head of Operations stated, “I’m pleased with the inaugural ‘Llamb’s Day’ events, the engagement among online consumers was very good, and more importantly it was a useful way to kick-off our renewed Welsh Lamb marketing campaign to the UK market and emphasise the key message of the seasonality of the product.”
Social & PR director of AgencyUK, Ian McKee said, “This was a great example of an integrated Social & PR campaign that encompassed research, press, radio, social media and celebrity endorsement. We hope to build on the success of the inaugural event to establish Llamb’s Day as an annual celebration celebrated nationwide.”